One of the most persistent delusions is the idea that capitalism has entered a new “spirit,” one in which it is no longer “Fordist” or hierarchical in the way it works. As Slavoj Zizek put it,

Capitalism abandoned the hierarchical Fordist structure of the production process…and developed a network-based form of organization that accounted for employee initiative and autonomy in the workplace. As a result, we get networks with a multitude of participants, organizing work in teams or by projects, intent on customer satisfaction and public welfare…

In this way, capitalism usurped the left’s rhetoric of worker self-management, turning it from an anti-capitalist slogan to a capitalist one. It was Socialism that was conservative, hierarchic and administrative.

Right off the bat this seems suspicious, at the most immediate level, do we see a radically different world of freer workers? In films like Office Space, were people complaining about how autonomous they were? If anything it is the exact opposite, we are entering an age that is more hierarchical than in centuries.

The idea that the workplace changed to be freer comes from Luc Boltanski and Eve Chiapello’s 1999 book, The New Spirit of Capitalism. In it, they look at the managerial literature from the late 1800s to today and look at how corporations tried to internally resolve some of the critiques that were offered. Of course while the evidence is vast, the conclusion does not follow; by examining how managers talked to each other, all it shows is the propaganda that companies used, not whether the structure actually changed.

In contrast, organizational studies show that the organization did change but not in the way Boltanski and Chiapello predicted. What is called “guard labor,” that is, the labor that is used to keep people under control rather than to do something productive, has dramatically increased. As one study shows, management has gone from about 10 percent throughout the 1940s-60s to 16 percent today. The authors even wrote about it in the New York Times (blog), and the problem could conceivably be getting worse. 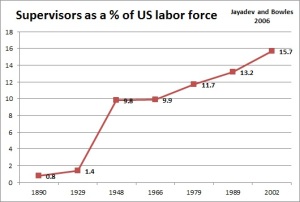 If this has shown anything, it is that capitalism is inherently hierarchical, and that, instead of following corporate propaganda, we should be looking for ways to change it.